A Journey Through Transformation

Life shifts in an instant.

When he was 16 years old, Dr. Jose Barrera was a high-achieving high-school student, working diligently to gain an education and make his immigrant parents proud. Then a horrendous car accident thrust him into the world of medicine. He hit a median in his beat-up, old Chevrolet and went face-first through the windshield. To most, this experience would be all bad, but it was the painful journey through the healing process after facial trauma that transformed Dr. Barrera’s interest from engineering to medicine.

Even the first step of applying to medical programs required a lot of hard work. To become one of the topic plastic surgeons in San Antonio, Dr. Barrera would eventually train at many top universities and medical schools, traveling the world as he built his impeccable skill set. Dr. Barrera knows that while his efforts were essential to the process, so was the grace of God. He is proud to be an embodiment of the American dream, coming from very little to achieve renown in his field of Facial Plastic Surgery.

An Airman Through and Through

As equal to Dr. Barrera’s love of medicine is his passion for his country. He immigrated to the United States as a young child with his mother. As his family struggled to learn English and build a new life, they never forgot the blessings of their new country. From a young age, Dr. Barrera wanted to give back to the country that had shaped and blessed his life so dramatically. 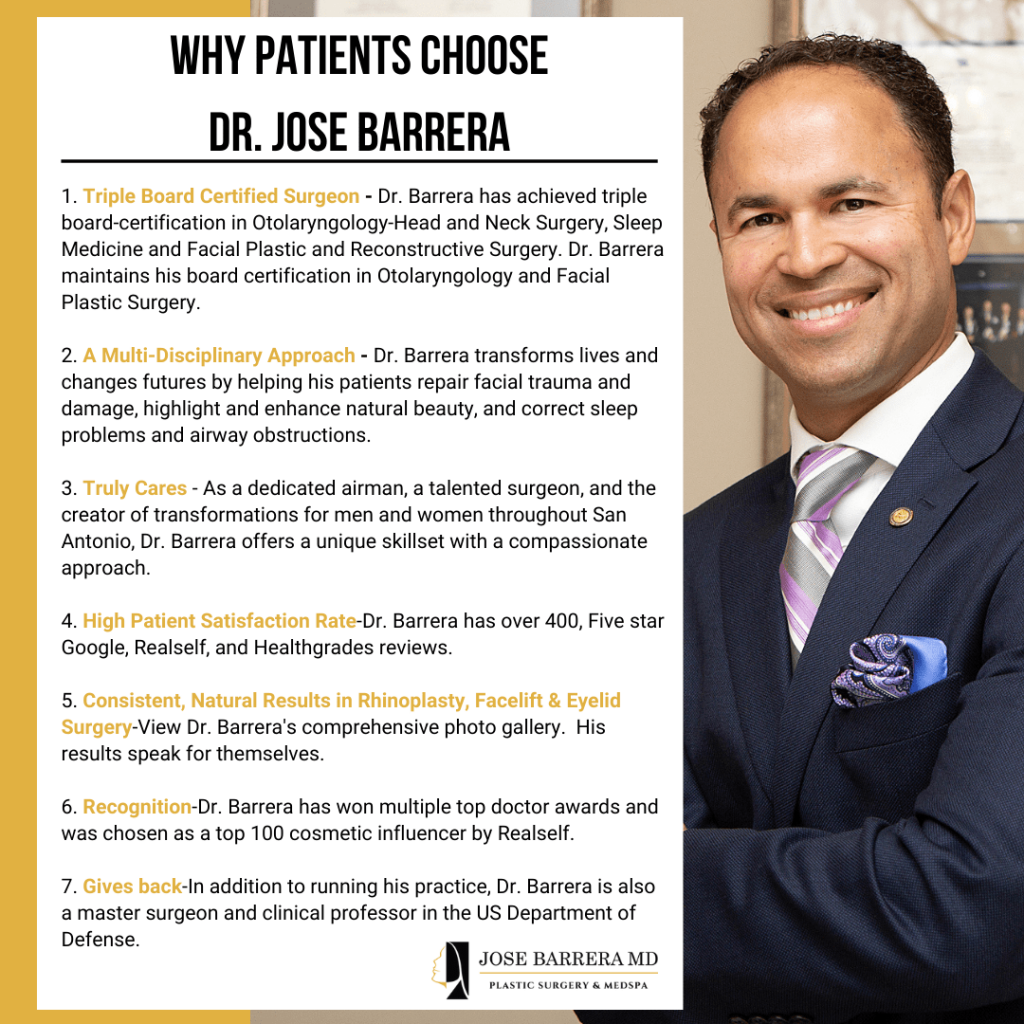 Listen to Dr. Barrera talk about his goals In Medicine

After graduating, he decided to pursue a military career, both as a way to serve his country and obtain his medical education. He enlisted in the United States Air Force, serving first as an enlisted member, then as a cadet, and finally as a medical officer and surgeon. Dr. Barrera has enjoyed a 30-year decorated career in the Air Force. He continues to serve as a reservist and professor with the Uniformed Services University. He is proud to be a citizen airman and a plastic surgeon at the Texas Center for Facial Plastic and Laser Surgery.

The Air Force values are deeply instilled in Dr. Barrera and he’s built his practice to embody those values and empower his patients. Dr. Barrera believes in:

You’ll see these values in action as you meet with Dr. Barrera and plan your personal transformation. Dr. Barrera’s friendly, down-to-earth demeanor puts patients at ease immediately. His credentials and skill combined with his eagerness to demystify all steps involved in each transformation ensure all surgeries are positive experiences.

Training in the United States and Abroad

His military career took him around the world, introducing him to new cultures and ideas. At the time, some of these journeys felt like a detour to his ultimate career goal of becoming a facial plastic surgeon, but as he diligently served his country, he quickly realized that the training and experience he was receiving would expose him to a wide variety of challenging cases that would only enrich his medical knowledge and increase his skills. 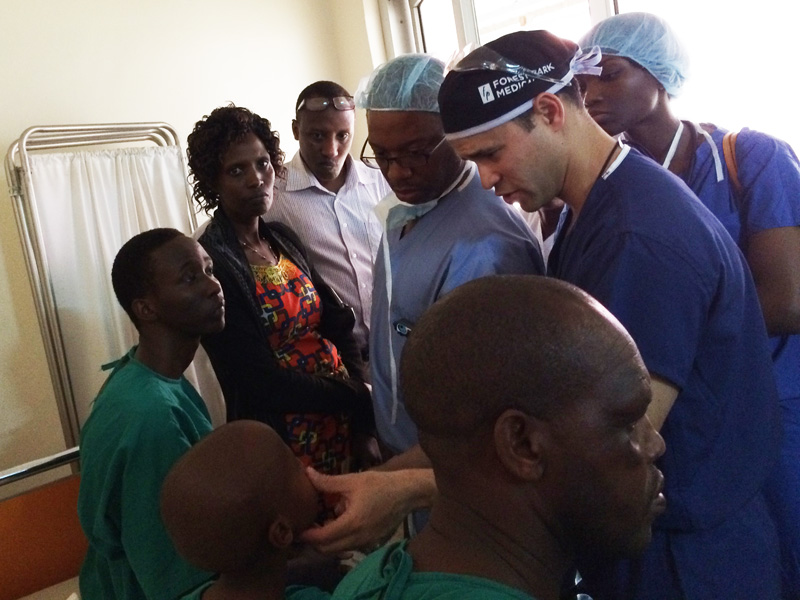 He has been recognized as a Master Surgeon by the Uniformed Services University in Washington, D.C.,  Surgeon of the Year by the Pacific Air Force, as well as the Top Researcher by the Department of Defense as well as George Washington University. Elected by his peers and patients, Dr. Barrera has been a SuperDoctors from 2014 – 2020, and Top 100 Cosmetic Influencers in the United States by Realself.com.

Dr. Barrera served as the co-chair of the Advances in Rhinoplasty Meeting for the American Academy of Facial Plastic and Reconstructive Surgery in 2020. He was elected to serve his local community as the President of the South Texas Society of Facial Plastic and Reconstructive Surgeons for 2020 – 2021. He teaches residents and fellows as a Clinical Professor of Surgery at the Uniformed Services University in Washington D.C., and as an Adjunct Associate Clinical Professor for Facial Plastic Surgery at UT Health in San Antonio, Texas.

Dr. Barrera Talks about his Humanitarian Work in Rwanda

The hallmark of Dr. Barrera’s practice, the Texas Center for Facial Plastic and Laser Surgery, is its multi-disciplinary approach.  Dr. Barrera transforms lives and changes futures by helping his patients address challenges in the head and neck area to look and feel their best. He can repair facial trauma and damage, highlight and enhance natural beauty, and correct sleep problems and airway obstructions.

Dr. Barrera likes to say that he creates masterpieces. Each patient is unique, with their own goals for improving the way they look and feel. Like a sculptor or artist, Dr. Barrera builds from the foundation he is given, improving the baseline and enhancing the lives and beauty of the patients he works with.

As a dedicated airman, a talented surgeon, and the creator of transformations for men and women throughout San Antonio, Dr. Barrera offers a unique skillset with a compassionate approach. Come into his practice at the Texas Center for Facial Plastic and Laser Surgery. Contact us to schedule your consultation.

Dr. Barrera is an avid competitor in triathlons and Ironman.

Delighted and humbled to have been chosen #bestof2020 in San Antonio. Thousands of Bexar County physicians and hundreds of dentists were asked which of their peers they would refer for inclusion in S.A. Doctors and Dentists: Best of 2020. 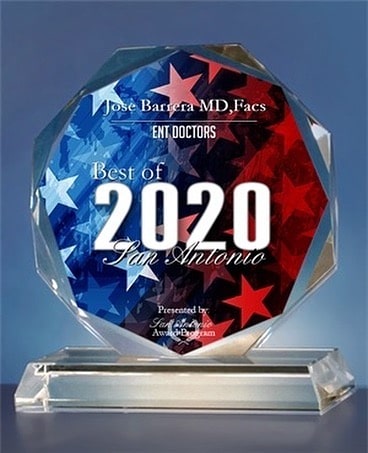 Get to Know Dr. Barrera:

Where did you grow up?

I grew up in Santo Domingo, Dominican Republic until the age of 6. My mother immigrated to the United States as a student and later brought me to her home in Queens, New York City.

Tell us about your education and training.

My education and training are what I consider to be a physician’s formation. My formation started as a cadet at the U.S. Air Force Academy, where I majored in Biochemistry. I graduated with Military Distinction in 1994. I received a Health Professions Scholarship to attend the University of Colorado School of Medicine and graduated in 1998. I participated in a Cancer Research Fellowship and was recognized as an American Association of Cancer Research Scholar and later received the Arthus S. Flemming Award from George Washington University and the Department of Defense Top Researcher Award for developing minimally invasive tools to detect micrometastases in head and neck cancer. I was accepted into the Otolaryngology-Head and Neck Surgery Residency and graduated in 2003. I served at Yokota Air Base in Japan from 2003 – 2006, where I received the Pacific Air Forces Surgeon of the Year Award for two years running. I completed Air Command and Staff College and Air War College with the Military and was certified as a Flight Surgeon with the School of Aerospace Medicine.

What type of surgical procedure do you specialize in?

I specialize in Rhinoplasty, Facelift, and Eyelid Rejuvenation.

What is your philosophy at your practice?

We are Rejuvenation Specialists. We believe that life is a gift. Our desire is for patients to live fully, enjoying the richness of this life. We specialize in facial rejuvenation, sleep, and wellness. As triple board certified specialists, we are equipped to treat patients in the fields of Facial Plastic and Reconstructive Surgery, Sleep Medicine, and Otolaryngology – Head and Neck Surgery.

Why did you become a plastic surgeon?

A traumatic event in my life influenced my decision to become a plastic surgeon. As a teenager, I was involved in a motor vehicle accident that left some facial scars. I also wanted to serve in the U.S. Military as a Reconstructive Surgeon for our wounded brothers and sisters in arms.

What do you like most about being a plastic surgeon?

I enjoy combining my love for art with my desire to shape and form. Plastic Surgery necessitates an artistic eye with skillful hands.

What methods did you employ to accomplish your goal of becoming a successful doctor?

I worked diligently at being a good student at the Air Force Academy and later in Medical School. Military discipline and training have served me well in terms of leadership and understanding to prioritize people first and the process of leading teams.

What do you like to do in your leisure time when you are not operating or seeing patients?

I enjoy spending time with my wife and children. We are a martial arts family and are actively involved in Tae Kwon Do and Kook Sul Won. Further, I enjoy cycling and triathlon racing.

What epiphany did you experience while studying to become a surgeon that led you to choose aesthetic surgery?

My active duty deployments to Japan, Chile, and Afghanistan honed my skills in reconstructive surgery. As Chief of Facial Plastic Surgery at Wilford Hall Medical Center and Brooke Army Medical Center, I gained an appreciation to work with Dermatology patients utilizing various lasers, sculpt a beautiful nose while reconstructing nasal obstructions, and rejuvenate faces of our military service members. The trust given to me by my military patients gave me the motivation to seek aesthetic medicine as a career. I was honored to be awarded the Top 100 Cosmetic Medicine Specialists in the World by RealSelf.com.

What setbacks or obstacles did you encounter while pursuing your goals?

Setbacks and obstacles can be seen as distracting; however, they may be a blessing in disguise. After my Otolaryngology Residency, I wanted to pursue further training in Facial Plastic Surgery. Unfortunately, the needs of the US Air Force came first, and I was called to serve for three years in Tokyo, Japan. My three years served as a launching point for maturity, independence, and clinical research, as I was able to excel in an austere environment.

What three words best describe you?

What mentors do you currently have, or have you had during your career that made a lasting impact on you?

I’ve been blessed to have so many mentors in my life. The late Dr. Richard Goode, MD, was my Fellowship Director, along with Dr. Nelson Powell and Dr. Bob Riley, during my formation in Sleep and Maxillofacial Surgery. Dr. Sam Most is a personal friend, mentor, and fellowship director in Facial Plastic and Reconstructive Surgery at Stanford University. Dr. Peter Adamson has mentored me and guided my humanitarian drive to help patients as we worked together in Rwanda, Peru, and the Dominican Republic with Face the Future Foundation.

How did your journey to be a plastic surgeon change you internally?

Working with humanitarian organizations like Face the Future as well as active duty on wounded warriors has given me an appreciation for what’s important in life: to love God and love others. I strive to reflect my spiritual journey with my internal values.

Why do patients choose you as their facial plastic surgeon, and what makes you different and unique?

As a facial plastic surgeon, I care about our patient outcomes. I have published over 70 journal articles and book chapters reflecting on my experience. Clinical research and proven results are at the heart of everything I do. I also appreciate the artistic element and share my results in the over 5000 before and after photos on our website gallery. The volume of experience counts in choosing a plastic surgeon. More so, I’m invested in every patient that comes through our doors at Barrera Plastic Surgery, Rejuve MD MedSpa, Endormir Sleep and Sinus Institute, and our AAAASF certified Texas Center for Facial Plastic and Laser Surgery.

We'd Love to Hear from You!